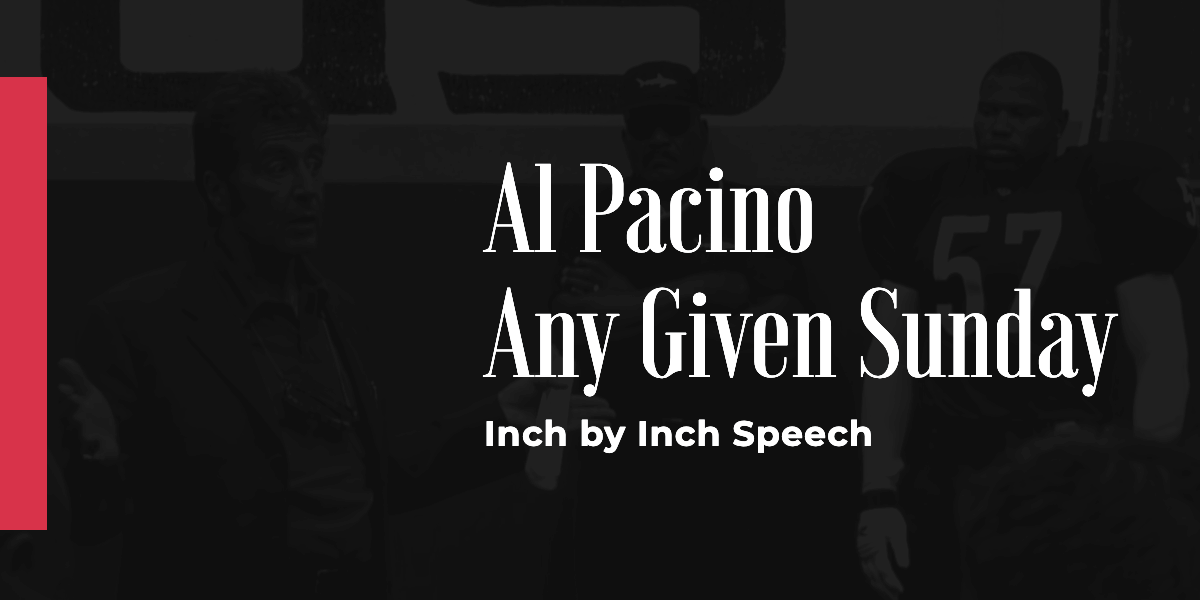 Any Given Sunday is a great drama movie about American sports from director Oliver Stone. The film is about a fictional American football team lead by their coach Tony D’Amato (played by Al Pacino), the film also stars Cameron Diaz and Jamie Foxx.

The movie is based on the novel of the same name by NFL player Pat Toomay.

The movie has some great scenes, especially in the last few scenes when the team are playing their last game, and the coach is motivating his players. Here is the motivation Al Pacino’s motivational speech from Any Given Sunday.

Al Pacino – Any Given Sunday Speech: Inch By Inch

I don’t know what to say, really. Three minutes to the biggest battle of our professional lives. All comes down to today.

Either, we heal as a team, or we are going to crumble. Inch by inch, play by play. Till we’re finished. We are in hell right now, gentlemen. Believe me. And, we can stay here and get the shit kicked out of us, or we can fight our way back into the light.

We can climb outta hell… one inch at a time.

Now I can’t do it for you, I’m too old. I look around, I see these young faces and I think, I mean, I’ve made every wrong choice a middle-aged man can make. I, uh, I’ve pissed away all my money, believe it or not. I chased off anyone who’s ever loved me. And lately, I can’t even stand the face I see in the mirror.

You know, when you get old, in life, things get taken from you. I mean, that’s… that’s… that’s a part of life. But, you only learn that when you start losing stuff. You find out life’s this game of inches, so is football.

Because in either game, life or football, the margin for error is so small. I mean, one half a step too late or too early and you don’t quite make it. One half second too slow, too fast and you don’t quite catch it. The inches we need are everywhere around us. They’re in every break of the game, every minute, every second.

I’ll tell you this, in any fight it’s the guy whose willing to die whose gonna win that inch. And I know, if I’m gonna have any life anymore it’s because I’m still willing to fight and die for that inch, because that’s what living is, the six inches in front of your face. Now I can’t make you do it. You’ve got to look at the guy next to you, look into his eyes. Now I think you going to see a guy who will go that inch with you. Your gonna see a guy who will sacrifice himself for this team, because he knows when it comes down to it your gonna do the same for him. That’s a team, gentlemen, and either, we heal, now, as a team, or we will die as individuals. That’s football guys, that’s all it is.

Now, what are you gonna do?